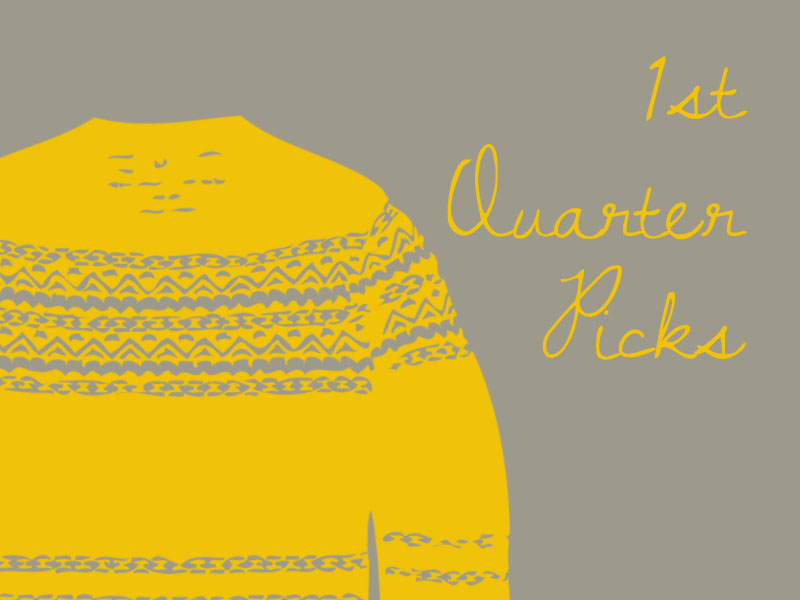 The Staves may the reason why I’m writing this post in the first place. I love them, in italics, so note the stress. I have been seeing the girls on Communion posts and newsletters since late 2011 but by then my Communion favorite was Ben Howard, then Michael Kiwanuka and a little bit of Lucy Rose and Jake Bugg, but this year I may be all about The Staves. Sure it’s a little too early this year to say (or not? 1st quarter done) but their album Dead & Born & Grown may be my favorite already.

I first heard of Elena Tonra’s melancholic chops on the track “Landfill” and featured it on my fist ‘mixtape’ – it’s an outstanding track with quite conflicting and complex ideas on one’s emotional state. Seems like that is what Daughter‘s music is, as they’ve released an LP (finally!) titled, If You Leave which includes this track “Youth” and an instant favorite, “Still”.

Father John Misty is one of those guys you just want to write a book about or film a documentary or a biopic of. He gives me Jack Kerouac feels and I’m not sure if that’s who he is really or that’s who he’s marketing himself as. Either way, he’s interesting, and  his music is an important factor to that.

It would be bad to snub Haim, especially when they were just included in a Mumford and Sons video. My hate for Haim could be explained in this conversation with one of my friends Ilia:

Me: I don’t know what Haim did to make me hate them.

Ilia: Haim? Why do you hate them?

Me: I dunno. Last year they were on MySpace’s homepage and Ryan Adams was raving about it allegedly and of course knowing Ryan Adams’ sound, I was expecting acoustic folk-y rock shit.

Me: And I ended up with something that could be an opening theme for an 80s movie. It annoyed me. Misleading.

Here is a lesson: sometimes marketing hurts you more than it helps. Also, there’s a thing called false advertisement. And the track that I was referring to was “Forever“. But then again, “Don’t Save Me” is a pretty catchy track and I wouldn’t really complain if someone plays it out loud, I would just be, “Well if you must play current music.”

I’m actually a bit confused where to put Jessie Ware (I almost placed her below with AlunaGeorge), but pop may be the best place for her. I feel like she’s built around the Cheryl Cole prototypes, and there’s nothing wrong with that.

Let us talk about CHVRCHES‘ perfection shall we? One, Laura Mayberry, you hot babe. Two, Laura Mayberry’s voice. Three, the track that is “The Mother We Share”. Four, their upcoming EP due very soon. And five, their recent success of making music on a basement to signing with Glassnote Records. Well. Done. You. Three.

My year basically kicked off with Purity Ring – it was a major boost from my almost hiatus-esque holidays. In fact Shrines may be the first album I listened to this year.

Kendrick Lamar is cool. I’m not legit enough to talk about him. But yes, he’s got a swimming pool of liquor and I dive in.

TWO WORDS: DONALD GLOVER. If you watch Community you would understand. If not, okay. So basically Donald Glover = Childish Gambino = Troy Barnes. If you combine all of his awesoness, your head might explode. Camp is fantastic and sure it took me a few more listens before I desynthesized myself with the art that is rapping, but “All The Shine”, “Bonfire” and “Heartbeat” – they deserve a few spins on your side.

AlunaGeorge is sexy. And isn’t that what RnB is for?

I expressed my interest in Alt-J on my list last year, in fact An Awesome Wave is on my runner-ups for top albums in 2012 but I think my infatuation for Alt-J escalated on an insane level when they were about 10-15 feet away from me. Despite of the fact that they’ve disappointed me that night (they walked out of the stage because of some tech issue – real performers make do!), somehow it worked differently on me in the lomg run: the following days I’ve resorted to watching Alt-J live sets on YouTube to convince myself that they weren’t so bad live, and that their quite bored/blah mood on stage was just who they were, personality-wise. The result is an obsession with Joe Newman – front man extraordinaire – and my quest to find more things about him and the books that he love and listening to An Awesome Wave 2-3 times a day until I couldn’t tell which song I like best.

This one’s pretty easy: The Rubens are Burberry model-esque boys singing Kings of Leon-esque songs. Why haven’t you clicked play yet?

I don’t think I need to explain myself about this anymore? If you don’t know or you haven’t listened to Justin Timberlake, you should see a therapist on the grounds of why are you not aware of what’s happening in the world for the last decade or so. Look I didn’t even put a link on his name!

Who doesn’t love Stars? They’ve produced countless hits over the years that by the time they’ve announced that they’re dropping by here I was already sure I’m in. The North is a wonderful addition to their discography, a bit more upbeat than the previous albums but stays true to what the band is all about.

Up Dharma Down, one of the biggest names in Manila’s music scene came out with their new album, Capacities, late last year. The band’s sound evolved and leaned in more to electro, giving their fans a new and refreshing perspective on their music.

I considered it a lucky instance when Outerhope opened for Stars last February. I instantly fell in love with the sibling duo’s dream-pop sound and cursed myself for not knowing about this band earlier than I should. I’m making it up by stalking them on gigs.