I kicked off this year with a high school best friend reunion that requires screaming for our once object of obsessions.

Now I understand that this totally compromises my indie cred and what my friend would call as my ‘hipster image’ (although I doubt that I’m a hipster, haha) but you know, we all have skleletons in our closets, ghosts in our pasts, whatever you call it. That’s slightly the case of this post — seeing Jeff of 98 Degrees, the three lads from A1, and Blue was a trip down memory lane. And I had a pretty grand time, mind you.
On February 25, we lined up at Smart Araneta Colseum and found ourselves immersed in teen fandom, complete with A1 banners and photos. I wasn’t really a fan of A1, and was only there because I had the biggest fan girl frustration on Blue, the Brit boy band that I swore I would see live when I was 14 but didn’t.
The night started with Jeff Timmons of 98 Degrees. I know Nick Lachey is more of a big star now, but really, where’s the band solidarity, even for old time’s sake? I like 98 degrees. I have a cassette tape of their first album that I insisted on playing during our day roadtrips to San Pablo. He came out and started with “Because Of You” which we all lapped up with nostalgia. 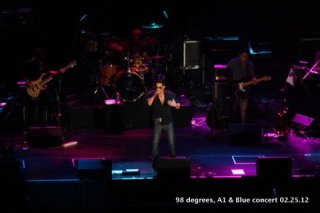 Jeff was my favorite member of the band, anyway, but I have to admit that the stage looked a bit sad with just him there. And it’s pretty hard to sing songs made for 4 on your own. I should know, cause karaoke-ing boyband songs is not easy. Haha.

Sharing the stage with Jeff was local band, South Border, and the genius that is Jay Durias, no introduction required, googling possible. The guys were supporting him on some of the hits and even lent their hit “Rainbow” for Jeff to perform to the crowd. It was an “Aww” moment. 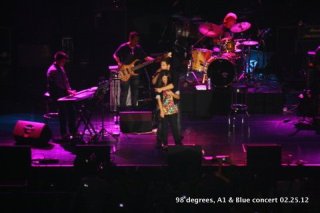 A lucky tween got to embrace Jeff while he serenades her with the band’s hit “I Do” — I know, he should have picked an older girl to make it look less…illegal or something. 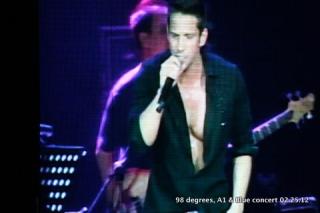 With his shirt slowly unbuttoning as his set list runs out, Jeff sang “Invisible Man” — a great song to end the 98 Degrees hits and onto the next band: A1.
A1 is my best friend’s fave (who was sitting beside me at the time, wriggling in her seat in excitement) and they came out — Christian, Ben, and Mark looking like, coughs, grown men. Christian stands with a guitar, Ben heads for the mic and Mark with his keyboards — and I thought, well, this is not the A1 we once knew.
And true enough, they kicked ass that night. Less sappy hits (they decided to do a medley of their hits instead), some awesome covers (including Black Eyed Peas’ ‘I Gotta Feeling’) and their new songs which I have to admit, I adore (hint: YouTube ‘Waiting for Daylight’.) 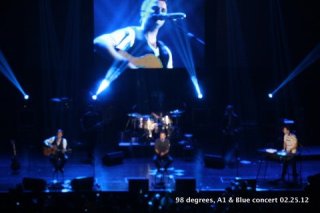 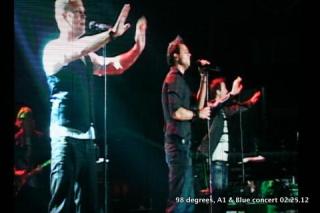 Any girl would know what song they’re singing in this photo. Okay, should, should know.
I can’t possibly say anything more about A1, except for the fact that a) I have renewed my faith in them; b) Ben Adams is ridiculously hot; c) I used to dislike Mark, but he looks hot as well, and ok, Christian, points for you too; d) I would totally listen to their songs even at this day and age and; e) they should have a concert on their own cause they seriously stomped Jeff and Blue in this concert.
We were on such a high when A1 finished that Blue, as much as I loved them, seemed like a disappointment. It stings to say that, being a True Blue fan (lol) but A1 moved from the cheesy dance steps — they performed. Blue, well, was choreographed. But whatever, any fan would still enjoy the boys.

They came out, clad in suits, looking dapper. I got major kilig just seeing them, a mere fulfillment of my 14-year-old (day)dreams. They performed a few hits (enter bragging: I know ’em all! I know ’em all!) and changed to something more eh, urban. 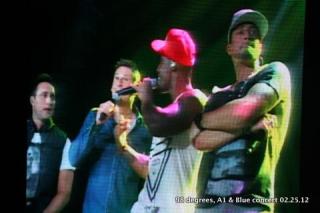 The Blue set was actually bitin, especially because A1 sang like a hundred (exaggeration!) songs. They didn’t even sing “Best In Me” which I have planned to bawl on during the concert (again, exaggerating).  Their last song was “One Love” which has proven to be a great last song syndrome.

*awkward tall person pose, yes.
The three of us left with big grins on our face and an intention to google Ben Adams’ photos. Good night, it is.