This is a story of two broke girls aka Tin and I.

Tin and I knew Death Cab for Cutie was coming a good month or so before they came. We had a plan. We had a plan with our friends to go together and see them on NBC Tent. 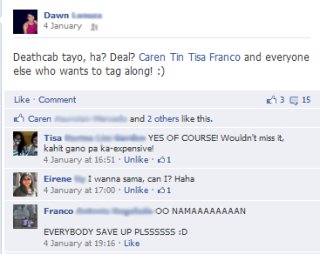 Alas, Tin and I never bought tickets. I bought shoes instead. So I would like to apologize to Ben Gibbard for choosing shoes over him; they were very pretty shoes, by the way.

But even if Tin and I weren’t able to buy tickets, we were at the Fort at that night, stalking the NBC Tent like true blue badass DCFC fans. We had dinner but jumped at the sound of “I Will Possess Your Heart” whilst chomping down our burgers. Turns out it was the second song of their playlist, and we scoured the tent, once again, like vultures. 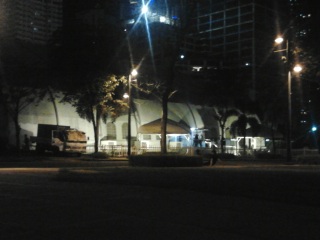 We could see Ben from the outside, even on the projected screen, and we could still feel the tremble of the bass and the cheering of the crowd and the clarity of Ben’s voice. We were there. And that’s what matters. 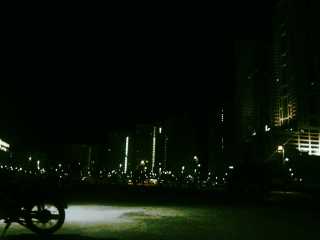 While we ran along and stopped by Starbucks to get coffee and talked and hung around at the parking lot, convinced that we’d see the band jump on that van we eyed for a good 20 minutes or so, we’ve immediately shut ourselves up when they played Transatlanticism. Best last song ever, if you’d ask me.

Of course, you can’t expect me to have Ben’s photos, but the ever so gorge Tisa has some and the bragging rights of being inside the tent, here.