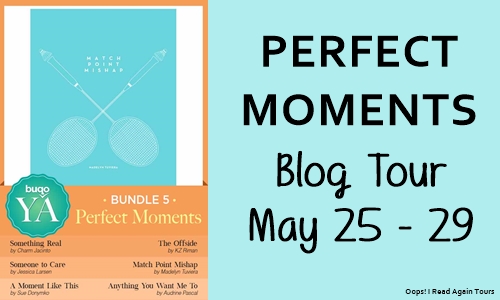 We’re down to the last bundle! Yay!

This time I’m featuring an excerpt from Sue Donymko‘s story, “A Moment Like This”! Here’s the synopsis:

Kris Mercado and Noel Abad are trapped in a posh resort hotel in Davao City during a particularly bad flood. After spending almost everyday together, they realize that they are undeniably attracted to each other. But reality bites as usual, and they now have to decide whether to chalk their romance up to forced circumstances or to explore what could be the sweetest love they’ve been looking for…

As for the EXCERPT:

A few minutes later, Noel came out wearing shorts and a snug shirt. His legs were quite hairy, and she caught a glimpse of his trim stomach when his t-shirt lifted as he dried his hair. Kris told herself to quit staring or he might think she’s the maniac.

He laid down on the bed, made himself comfortable, and closed his eyes before acknowledging her statement. “Okay, what do you want?” he said tiredly.

“That’s it, what do I want?” she asked incredulously.

He looked at her and raised both eyebrows. “It’s not as if I don’t know what to not do such as not stare at your legs if you wear shorts,” he said innocently, but his eyes held a teasing gleam.

Kris flushed. “Touché. Okay, no staring. No going to each other’s beds. No undressing in front of each other, no leaving dirty clothes on the floor. I don’t want to see your underwear!”

“What makes you think I wear any?” he said, closing his eyes again.

She gaped at him until he started smiling.

He forced himself to sit up and look at her seriously. “I’m really not going to take advantage of you. I know we’re still in our hormonal years, but I do act like a human being ninety percent of the time,” he said.

This time, she was prepared for his teasing. “And ten percent of the time?” she asked lightly.

“That’s when I start scratching my head with my feet, start licking my balls, and howl at the moon,” he said with mock seriousness before laying down on his bed again.

Kris couldn’t help but laugh at that imagery. She caught him smiling just before he fell asleep.

Again, the bundle is available on Buqo! They’re also giving away one powerbank to a lucky Philippine resident! Yay! Here’s the link to join that giveaway. The awesome authors included in this bundle include:

Sue Donymko
Sue Donymko lives and works in Manila, Philippines. When not writing or working, or working some more, she eats, watches a lot of television, sings — much to the neighbors’ dismay — and reads until she falls asleep.
Blog | Twitter
Audrine Pascal
My heels are sky high. Always.
Twitter | Wattpad
Charm Jacinto
Charm Jacinto’s first choice of books are historical romances written by Barbara Cartland, Julie Garwood and Jude Deveraux way back in college. She graduated as BSBA major in Human Resources Development but had an epiphany that her path leads to still helping people but more on the medical side. Her life became more meaningful because of her husband and daughter who encourages her to be the best that she can be.
Twitter | Wattpad
Madelyn Tuviera
Madelyn Tuviera is a twenty-something woman whose ideal way of spending a day is sipping coffee while writing (and trying not to spill coffee on said output). She started writing when she was in fifth grade and hasn’t looked back since. She’s grossly fascinated with drama, romance, and tiny creatures that can be tamed and kept in capsules. She does not grammar on weekends. But she does think of writing 99.9% of the time.
Blog | Twitter
Jessica Larsen
Jessica E. Larsen is a hopeless romantic, who will forever be young at heart. She enjoys traveling a lot, drawing inspiration from places she visits and interesting people she encounters. She loves to read, and writes in different genres and spends hours arguing with her characters. At times she likes playing the villain and gives them a taste of hell when they refused to listen to her demands.
Jessica was born in the Philippines and lived in Spain since she was eighteen.
Blog | Twitter | Facebook
KZ Riman
This romance, erotica and fantasy author spends each moment of her days writing. She spends her free time — if she ever gets any pf that — inside her room, where she reads steamy novels and watches romantic comedies.
KZ is a pure-bred Filipina who lives with her family in Tarlac City, Philippines. Growing up, she has dreamed of becoming a novelist and screenplay writer, and has written countless stories, which she shares with her friends. Now, she dreams further by sharing her imagination to the world.
Blog | Twitter | Facebook